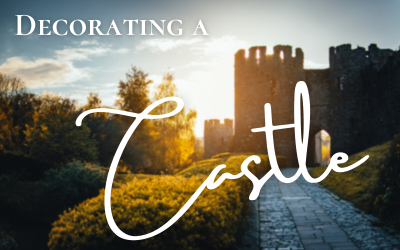 I have read a lot of history books and primary texts. A LOT OF THEM, guys. I went to graduate school for medieval history, and I had been reading about it long before then. Yet, somehow, this one got by me.

I was reading the Táin, a story about ancient Ireland that was recorded in part in the 12th century, when I came across this line: “There were one hundred and fifty inner rooms, each of which held three couples. The houses and rooms were panelled with red yew.”

Years of reading, writing, watching, visiting, and I somehow completely overlooked the fact that many medieval castles wouldn’t have been just stone interiors. Of course I always imagine paneling and plaster when I think of Tudor England and later periods, but it never once occurred to me that it was in use before that.

What’s that? But I’ve visited restored castles before, you say? Yes, that’s true. But never underestimate the human brain’s ability to remain ignorant in the face of knowledge. Or for me to be distracted by a cool staircase and ignore the walls entirely.

So what did castle interiors look like? You can bet your bottom dollar that the minute I read that passage I grabbed every relevant textbook on my shelf and started Google searching furiously. It turns out, unsurprisingly, that the medieval text was correct. Ish. Paneling was used, but it was expensive. The description in the Táin, as is clear from the ridiculous number of inner rooms, was meant to emphasize the king’s wealth and prestige. So each room being panelled in red yew is most likely an exaggeration.

I found an excellent summary in Life in a Medieval Castle by Frances Gies and Joseph Gies. Here it is, for your own edification:

“Both the interior and exterior stonework of medieval castles were often whitewashed. Interiors were also plastered, paneled, or ornamented with paintings or hangings. Usually these interior decorations, like most of the comforts of the castle, began with the dais area of the hall, often the only part to be wainscoted and painted. A favorite embellishment was to paint a whitewashed or plastered wall with lines, usually red, to represent large masonry blocks, each block decorated with a flower.”

What might that look like? Here is the king’s bedchamber in the Tower of London, with the accompanying description, all from Historic Royal Palaces: “The royal bedchamber inside St Thomas’s Tower has been re-presented as it might have appeared in the time of Edward I.

The replica bed was based on one mentioned in medieval accounts, which was made to accommodate the tall, imposing King known as ‘Longshanks’.”

Look at those walls! You’d never even know there was stone behind them!

Below is an image shared by Guédelon, a super cool working castle site in France, to show off some different painting techniques.

What I really took away from this is that the possibilities are far more complex and interesting than I imagined when it comes to writing about my characters hanging around castles. The walls could be whitewashed, painted any number of colors, plastered, paneled, or some crazy combination thereof. I read that green and gold were popular paint colors thanks to King Henry III.

What do you imagine inside a castle’s walls? How would you decorate your great hall? To Love a Laird: A Seasons of Scotland Prequel Novella (available here)