The Princess and the Peasant: The Real-Life Love Story of Joan of Acre & Ralph de Monthermer 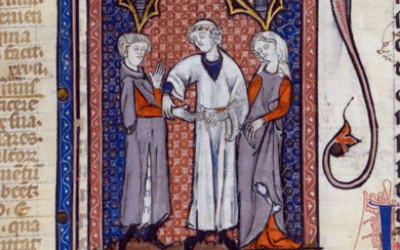 Hello! I’m so glad you could stop by! In today’s blog post, we’ll be looking into a novel-worthy, real-life medieval romance.

Have you seen A Knight’s Tale? This is basically that story, except the heroine isn’t just a noble, she’s a princess!

Joan of Acre (so named because she was born in Acre while her parents were on crusade) was the daughter of King Edward I of England. He is famously known for his involvement in the 13th century dispute over the heir to the Scottish throne (Yes, Braveheart. Longshanks was her dad!).

At age 18, she was married to Gilbert de Clare, Earl of Gloucester, nearly 30 years her senior. In spite of the age difference, all accounts claim he treated her like the princess she was, offering gifts and tokens to win her affection even after the betrothal was finalized. They were only married for five years before Gilbert died.

A year or so after her husband’s death, Joan fell in love with a squire in her late husband’s household–Ralph de Monthermer. She sent him to her father’s court to be knighted, after which they married in secret, even as her father worked to arrange another marriage for her!

Now, you can imagine dad wasn’t too thrilled about this secret marriage to a peasant.

When Joan first approached her father about her desire to marry Ralph, he confiscated her lands, hoping to force her to change her mind. When he told her she was to be betrothed to the Count of Savoy, Joan had no choice but to come clean about her secret marriage.

Edward was so enraged that he imprisoned Ralph and confiscated his daughter’s holdings. After he’d had some time to cool off, Edward invited Joan to come to court and make a case in favor of her marriage to Ralph.

Thanks to English chronicler Thomas Walsingham, we know at least part of what Joan said to her father:

“It is not considered ignominious, nor disgraceful, for a great earl to take a poor and mean woman to wife; neither, on the other hand, is it worthy of blame, or too difficult a thing for a countess to promote to honor a gallant youth.”

It’s also important to note that by this point Joan was getting pretty far along with her first child from the marriage. Some historians think that a combination of advice from the Archbishop, agreement with Joan’s plea, and consideration for her coming child all played a part in changing his mind.

After hearing out his daughter, Edward relented. He released Ralph from prison and made him an earl. He returned much of the land he had confiscated from Joan. And the happy couple went on to have four bouncing babies.

The image above is from the British Library’s online collection, depicting a wedding ceremony. It is from France, dated to the late 13th & early 14th centuries.